Interview with a GM - Mark C

By Mark Cunningham June 22, 2021
Hi Mark, well me, yep you guessed it I am interviewing myself, as one of the three GMs for the inaugural games in venue, I thought of a bit of a mini interview on the 3 GMs would be cool.
So lets crack to it.

Depends...
I started off with things like HeroQuest, Space Crusade, Battle Masters which although are board games we played out the characters.
Steve Jackson and Ian Livingstone Fighting Fantasy gamebooks published by Puffin, were probably my first foray into Roleplaying games. 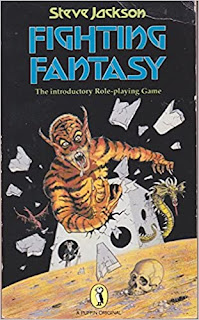 Later Shadowrun, D&D, Cyberpunk and Vampire the Masquerade, Call of Cthulhu and LARP

Meeting mates, doing dumb shit and then rolling epic for it. Still remember an old half Troll from Shadowrun, who was a dumb detective/private eye, who thought shouting shhhh to his shotgun made it a silenced weapon.

Had the thought, it cannot be that hard can it?
From there tried it out, then have been either playing or GMing ever since.

I GMed ages ago, but then found booze, girls and ended up having kids. So I have caught the bug again recently so 2nd wave is from about 2017.

Recently Burning Wheel: Misspent Youth interesting concept of game style that I quite liked, but then fell in love with the Shades of Vengeance ERA system. Currently have GMed ERA: Hitman and ERA: The Empowered, have played ERA: Consortium, ERA: Forbidden and ERA: The Chosen, and will be running ERA: Lyres this next rotation.

Designing a world with the players, it is there game as much as your game. Love it when players go off book, to the point that why have the book, lets just roll with the chaos.
I don't run scripted campaigns for this reason. I tend to have a few feature points and a few interlaced plots that the players can explore or ignore.
Don't get hung up on that NPC you have a whole background and script for, being killed on sight, just roll with it.
Pitfalls, you can spend way to much time preparing for a campaign or session, only for the players to take 4 weeks to get to that bit. Repeating yourself due to the dreaded mobile phone curse.

When players realised that the pain they can deal out to "monsters", they can also deal back, and guns hurt a lot, more so in a fist fight.
One game for a huge run of sessions was inches from TPK (Total Party Kill) every session, due not to the power of what they were facing, but the choices they made! I loved it, they loved it, so all good.

ERA: Lyres is a group of "adventures" who look to blag food, drink, board from telling of their exploits.
As hey why risk your life adventuring, when there is a living to be made telling tales of adventures, especially if you insert yourself in those tales.
The better they get at telling tall tales, the bigger audience they can command, just be careful not to be sent on a real mission....

Endorphins and chocolate
Building the story together, sharing in the memorable moments, the buzz\ of a feat accomplished.
Throwing curve ball ideas, ie in current game we have had sessions that are brawl fests, thinking series of negotiations, dungeon crawls,  piss-ups in the pub with drunken pool.
I love it when you try something different and it is appreciated.