Looking to run from October with a party of 4 or so. It's a relatively long campaign but takes you into hell, so what's not to like!

It starts in the city of Baldur's Gate "as it slowly succumbs to the sway of corrupt powers and evil gods".
The adventurers will go on a search for redemption as they descend into Avernus, the first layer of the Nine Hells, which is ruled by the Archdevil Zariel.
Players will also have the option of wading into the Blood War. 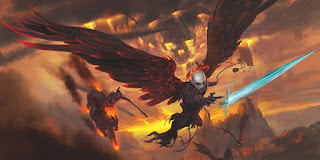