In the world of Skotar, where magic flows freely and the gods rise and fall on the belief of their followers, the Hatean Kingdom is in its final years.

The king is a sickly, weak-willed child and the cowardly nobility squabble over dwindling wealth while rarely dispatching any forces beyond their walls. The commoners toil on, relying on the sheer scale of their territory and the untamed lands at their borders to keep old rivals and newly independent states at bay, for now.

As winter looms, the duke of Fablehall caves to pressure to call freelance adventurers into a group to investigate why the nearby hamlet of Eulham has failed to deliver its annual harvest tithe. So close to Fablehall and far from any borders, not to mention home to a respectable sorcerer, Eulham is thought to be one of the sleepiest of town in all Skotar. It is here, in the Hatean Kingdoms’ breadbasket, that a new threat begins to stir.

The dark cannot be unheard.

A 5E campaign starting at Level 3. Characters are standard point buy, but receive a free feat at character creation (and gp equal to the max roll for a level 1 character for equipment) 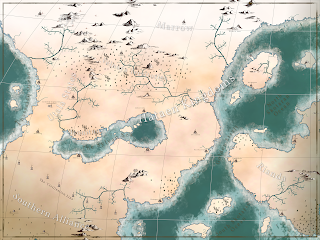