TALISMAN, a sci-fi adventure set roughly 12000 years in the future.

It'll be using the Lancer TTRPG system via Roll20, a "Mud & Lasers" game with a good mix of narrative play and bombastic combat.

If you like the idea of piloting your own giant Mech suit, hacking into terminals with cybernetic implants, or stealing sought-after equipment from powerful MegaCorps, then this is the game for you.

Those who survived managed to spread their wings and form a great interstellar Union of countless star systems.

The (give or take) 12,000 years it took to build this new utopia were fraught with violence, so it’s no surprise that remnants of these wars still remain today.

You are a newly licensed, fully-fledged pilot of your own personal mechanised chassis (or ‘Mech’ for short).

You could be a rusty engineer from the outer Cascades, a no-nonsense trader from the Karrakin Baronies, or even a simple baker from the deserts of Moonhammer.

Whoever you are, you’ve just been awarded your Lancer License – giving you access to state-of-the-art technology that some could only dream of. 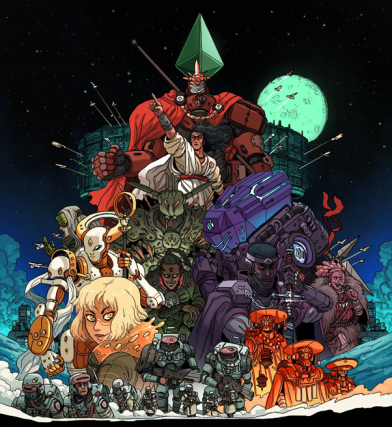 Let us know if you fancy playing