In this game, you are a hitman, an assassin who eliminates targets for anyone paying the right amount.

Whether your skill is stealth, approaching your enemies unseen, firing a bullet from a neighbouring rooftop, hacking automated defences or demolishing a building to eliminate everyone inside, you are always in demand. You might be new to being an assassin, or you might be a grizzled veteran about ready for retirement. None of this matters to the Assassins’ Guild; only that you can complete the job and your team are assigned.

With the protection of the Guild, you need not fear retribution once you escape the scene of the crime – the scrubbers have your back. Every trace of you, every piece of camera footage, everyone who will testify that you were there will vanish without a trace. As a result, joining the Assassin’s Guild was never a hard decision for you, even with the possible downsides...
When you are in the field, you have only your equipment, wits and stamina to protect you from discovery and death. Guards, friends and even other assassins may stand between you and your target but you have a mission... and no-one fails the Guild and lives. The few who have ever failed and survived found themselves hunted by other members, a contract the Guild pays for itself. They lived the rest of their short lives looking over their shoulder until the day someone caught up with them and removed them.
Various agencies around the world serve as fronts to offer the Assassins’ Guild’s services, and you are sent wherever the money is. Usually, a team of assassins is sent by the guild to ensure the success of your mission.
Assassins have existed since the birth of Humanity and they have hidden a secret for much of that time: amazing powers manifest in Humans from a certain lineage.
While most Humans will never know this, some assassins have a mutated gene. They identify and train these “Kinetic Abilities” within their ranks. Depending on who you are, it can cause affinity with metal, the ability to create force fields or even to control one of the fundamental forces of the universe! It’s far from a requirement, and not every assassin possesses an ability of any kind, but those that do are often seen as vocational assassins.
The contracts The Organisation provides are from anonymous sources: you generally don’t know, and are not encouraged to care, who the client is, as long as you are paid.
You don’t work alone, however: any good hitman knows that a support team is vital to survival. Any of the others in your team may also be skilled assassins, but only one of you can be the trigger man on any mission. Fortunately, they pay is distributed equally by The Organisation to everyone who contributes.

Your phone rings; number withheld. It is that time again.
You have a mission to complete. You are given a location and a name – your contact, not your target.
You grab the small bag you keep by the door and stride out confidently.
Your next target will never see what’s coming... 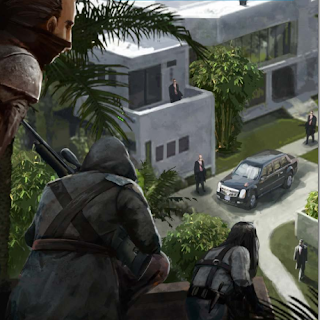