Interview with a GM - Calum

By Mark Cunningham January 21, 2022
So I asked Calum for and interview as he is up for GMing one of the April Rotation Games.
His response: "Sure - this is my first time GMing so there's not too much to say really..."

I first started playing RPG's a few years ago, with an online game of 5e a friend was running for a group of new players.

The most memorable part was a fight in an underground, waterlogged cave.
My character was a tabaxi, and we all know how cats don't like water! 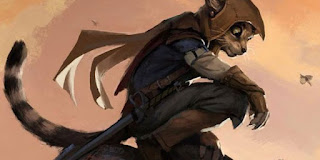 It became a game of trying not to get in the water, leaping from rock to rock whilst trying to get close to the witch we were fighting.
It was really fun, and a great example of how creative roleplay from both players and the GM can spice up combat encounters.

This is my first time running a game, but I put myself forward because I think it will help me appreciate being a player more, and to see if I can do it!
I really enjoy the storytelling aspect of RPG's, through both Roleplaying and combat, and I'd like to take whoever on this journey with me.

How long have you been GMing and what systems have you GMed??

I've done a few practice sessions with my long suffering girlfriend, all in 5e. But really I'm throwing myself into the deep end here.

Being a GM is different from playing in that you can't just turn up with your character sheet and some dice and have a good time, there is a bit more preparation involved.
But at the same time it is rewarding having your players explore and enjoy the world you've built for them.

I haven't really run enough games to answer this question! Ask me again in a year.

My game is about a washed up old port town, where various factions are trying to assert their dominance, whilst the dangerous secrets start to emerge...
I believe that combat is at its best when the players are immersed in the world, so expect plenty of world building, roleplay, but also a lot of action to go with it!

Again, ask me again in a year! But I hope to get satisfaction out of letting my players work things out for themselves, and building an interesting story together - it shouldn't be an antagonistic relationship, but a set of challenges to breathe life into the players characters.