It is set a year after Giants have invaded and taken over the land. Giants of different types working to an unknown common goal for reasons equally unknown. The party, part of a resistance movement that has tried to find a way to beat these impossible odds, finds help from an unlikely source and a battle against time, evil (and giants!) ensues. 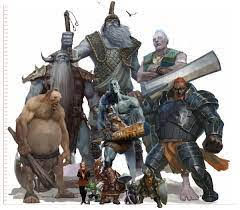 It has been over a year and a half since they came. A largely peaceful world torn apart by invasion. Giants of all kinds despite their historic enmity joined in unexplained alliances catching all around them off guard. Within a few short weeks, villages were razed to the ground, towns overrun and cities were taken over with overlords and their minions keeping control.

Despite most means of defence being confiscated and enslavement being the norm, small pockets of defiance remain, desperately holding onto what is left of their freedoms in the hope of one day getting the chance to take back their world. This is where you find yourself. A small rag-tag team of resistance looking for supplies wherever possible and hoping for just a chance to put things right. Sometimes though, those chances come from the most unlikely of sources.

NOTE: This campaign will begin with characters at 5th level so some AD&D experience will be needed to be able to play