Interview with a GM - Jo F

Although not strictly an RPG, my mum bought me the Warlock of Firetop Mountain FF book when I was about 10, and I remember being totally captivated by Russ Nicholson’s illustrations. 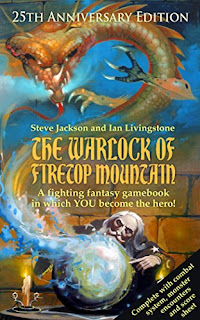 Then we got a spankingly hitech VCR (which was bloody massive!), and the freshly opened video shop round the corner only had one cartoon in store. Ralph Bakshi’s Lord of the Rings. That film literally blew me away. So became a big Tolkien fan.

I got the red D&D basic boxed set for my 12th birthday back in ’84 and played it at lunchtimes at school. Well, I say ‘played it’, I managed to roll up character stats but the rest of the game play was definitely more ‘play’ shall we say. I was more into copying the pictures and drawing maps. But when I left school at 15 and also left RPGs behind. College girls. Enough said.

For whatever reason it was just exciting. You had these cool books, maps and stories about wizards etc. I remember spending hours looking at all the cool illustrations and imagining what their worlds were like.

Stranger Things had just come out, and Bea, my kid (can’t say daughter as they are non-binary) was just old enough to be into it. They really wanted to play D&D, so I said I’ll get the books and run a game or two for them and their friends. I enjoyed it more than the kids did. Took me back and I became hooked so decided I wanted to play regularly.

I started out with D&D 5e. Unfortunately, the group of friends I play on Fridays with hate D&D, so I’ve only managed to get them to play the Phandalin and Saltmarsh campaigns.
I ran a Blades in the Dark campaign for a while but found the co-op gameplay really hard to prep for. The setting is brilliant though and I’d love to run another campaign set in Duskwall using a different rule system. I’ve dabbled with FATE, but in all honesty struggled with the whole ‘aspects’ thing.
Ran MORK BORG, which looks great but was pretty dire. Definitely style over substance. And I devised a weird west campaign using the Index Card RPG system which was a lot of fun. That’s what got me into Deadlands. ICRPG is really very good, but I wanted a system that had a bit of background and lore to it.

Storytelling is the biggest pleasure for me. Bringing something to life. There’s a lot of creativity in taking an off the shelf module and making a cohesive and immersive story from it. For me that’s where a lot of GM’s fall down. It’s not good enough to sit behind a screen and just read sections out of a book; it’s doing that and making the story mean something to the players. Giving them a reason to give a damn. Sometimes a bitter sweet outcome that feels real, even for a great fantasy hero.

Pitfalls? You invest a lot of time and effort prepping to run a campaign. Sometimes it goes well, sometimes it doesn’t. It’s gutting when it doesn’t go well. At the end of the day it’s supposed to be fun.

When players bring something creative to the story that takes it to a different place. Something you hadn’t thought of that makes you go, ‘yeah, that’s cool’.

And a one shot I ran for my Bea and their friend one Saturday. Right at the end, a spontaneous situation occurred where Bea had to decide whether to save their friend, or this lovely, kind NPC that had selflessly helped them throughout the adventure. Of course they choose their friend, but both kids were genuinely heartbroken when this NPC died. Ahhh, good times…haha! 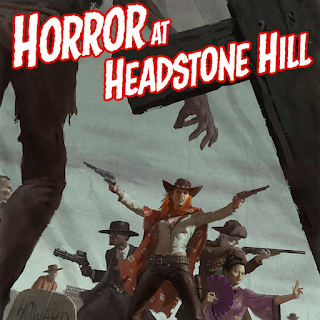 It’s a horror filled sandbox around an alternate Old West, where things definitely do more than go bump in the night. Let’s just say the players will have their hands full juggling demonic entities and the politics of greed. Not sure which is worse?

Actually doing something with all these damn books I’ve been collecting for the past few years! And, as I'm fairly new to the club, I’m looking forward to getting to know some other members, and hopefully giving them a game to remember. No pressure then. So yeah, I’m bricking it haha.